What company can safely use the word 'reissue' to name and shape a new mic after an old, without receiving ridicule or disdain from audio professionals and collectors? Of the remaining heritage brands, only Neumann can. AKG cannot, and Telefunken... well, that's an entirely different story again.

'Reissue' is the appropriate terminology for a mic that most closely resembles its direct antecedent, predecessor, ancestor, or whatever word you want to use to describe true blood. In my dictionary, 'Replica' connotes a cheap version of the real thing, while 'copy' and 'clone' are more honest efforts that fall short. That leaves us with "reissue"- the closest thing to the real thing, where all vital, sound-shaping components are identical with the original, and the rest as close to it as can be sourced or manufactured today, while cutting absolutely no corners in doing so.

It's been a couple of decades since Neumann "revisited the past" with considerable dedication and attention to detail: the U67 reissue was indeed 1:1 authentic, both in construction and sound, with the exception of the head/switch assembly. Consequently, unlike other copies of famous mics attempted by mere mortals, this reissue has seen its price go up to where the originals have recently soared.

So it came as a surprise when I received notice that Neumann was going to offer, in limited numbers, an authentic reissue of the original U47fet- a model which, during its first run, never quite caught the enthusiasm of the buying public like the U47 tube mic did and still does. Expectations back in the 1970s were for something a bit closer to the famous predecessor than the stubby, single-pattern rendition that was introduced. It had a novel discrete six-transistor-plus-FET op-amp at its heart, with relatively low output, and not exactly three-dimensional musicality or subtlety of tone.

My aim is to analyze to what extent the fet47 reissue remains the ultimate kick drum mic (tongue in cheek, and more about that later) and whether it has succeeded in rivaling the original fet47, a mic designed in 1969, shipped in the spring of 1972, and discontinued 30 years later.

I am grateful to Vintage King which loaned me a sample of the new mic for a few days. I also would like to acknowledge Neumann's Martin Schneider, who added valuable historical details and corrections of historic details.

The mic's first impression of build quality, adherence to original dimensions, shapes and surface treatment is positive, though it will be rather easy to distinguish reissue from original: the cardioid sign is upside-down on the reissue. The basket with its three layers of mesh is as sturdy as the original. But head and housing surfaces now sport bead blasting that makes the mic look a bit shinier than in the past. Other than that, everything looks and feels solid and absolutely identical to the original, except for a slightly shorter thread section on the mounting arm.

Once you carefully look at original and reissue pictures side-by-side you recognize that the reissue is indeed the real thing, all the way to the muddled, point-to-point arrangement of discrete FET, capacitors, resistors and wiring - all still arranged like an enthusiastic bread board project. That an ultra-high tech company like Sennheiser could still train human beings to duplicate this mess and solder it in place, rather than use a neat SMT chip is beyond me. But duplicate they did, in every little detail, all the way. No shortcuts. Amazing. This reissue is even closer to the original in all aspects of parts choices, construction, and build quality than the few hundred U67 made in 1992 were to the original U67 from the 1960s.

But a note to fakers: knowledgeable fet47 collectors will not fail to distinguish original from reissue- there are subtle nuances everywhere, and no part could ever be substituted and not be noticed as stemming from the reissue: slightly different angle and bead blasting of the Philips screw heads...different mesh density of the inner top basket layer... Fairchild FET vs. TI FET... Still, all parts aside of the new and hopefully longer lasting switches (see below), are fully interchangeable between old and new.

How does the sound of the reissue compare? Same cotton-mouthy sibilance, same restricted high- and low-end, same dynamic behavior. I make my living listening and interpreting the sound of microphones, but I could not tell the difference in sound character between original and reissue, even after switching head assemblies around: the op-amp-driven processor is such a strong sound shaper, it obliterates any possible subtleness derived from different capsule timbres (especially when considering that the K47 capsule, including the current batch, is quite a stunner when not veiled by the fet47's electronic processing).

Speaking of subtlety, the fet47 has none, and never had any. Yet there is a clearly identifiable character to this mic, and that character has a deserved, firm place in any well-stocked mic locker: I don't need to revisit the peculiar synergy between a kick drum's beater attack, delayed resonator head response and this mic. The fet47 also excels with stand-up bass, because it does not obliterate texture, and does not boom too much in the lowest bass region; it's fantastic on many brass instruments, and even works with some voices -Aretha used on some seminal LP cuts- but particularly on male voice, where the transformer and K47 capsule add to a faint impression of a U47 tube, despite the op-amp processor.

Bottom line: the U47fet reissue has the exact same sound in all its (non-) subtlety as the original, because sound-shaping electronic components, capsule, FET, head shape, basket, transformer, etc. etc. are identical with the original version. (Even if Haufe or whoever makes the transformer now cheated on the exact winding specs and core laminations of the original Berlin-made transformers, they must have done an awfully good job faking it).

All photos show reissue on the left, original on the right. They are copyrighted "© Klaus Heyne 2018" and may only be used with attribution.

First picture: Note the shorter mic stand adaptor piece on the reissue, copied from the 1983/84 model, and also used in TLM170. 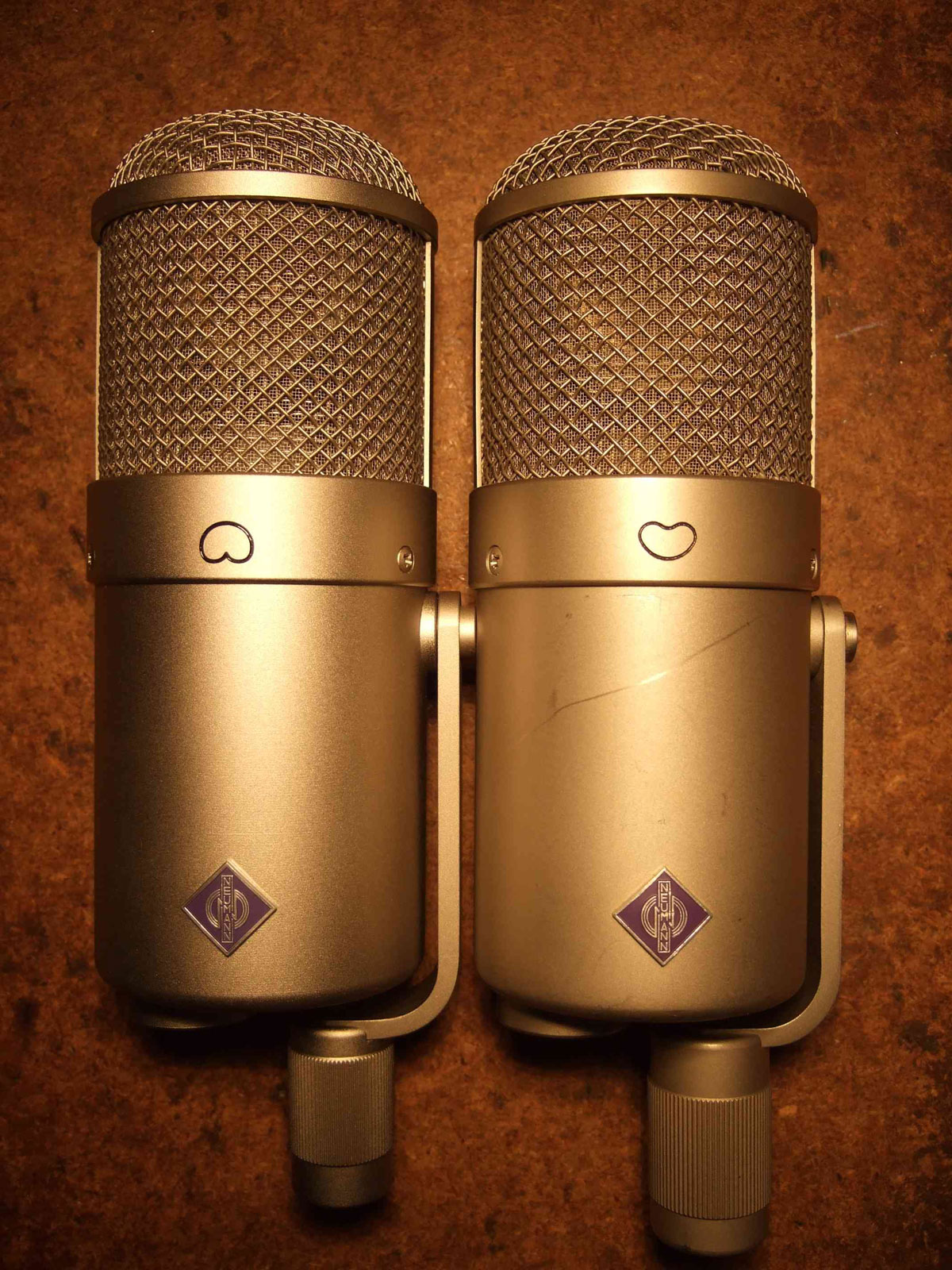 Note the new switches are in the 'off' position mid-way, whereas the original switches had the indent at the bottom of the switch travel when 'off'.

Note the reversed cardioid logo on the reissue. Same as on the original model manufactured from 1980 onward (original on right is from 1975 and is featured in all photos). Other than that, same quality, dimension, weight and feel as before. 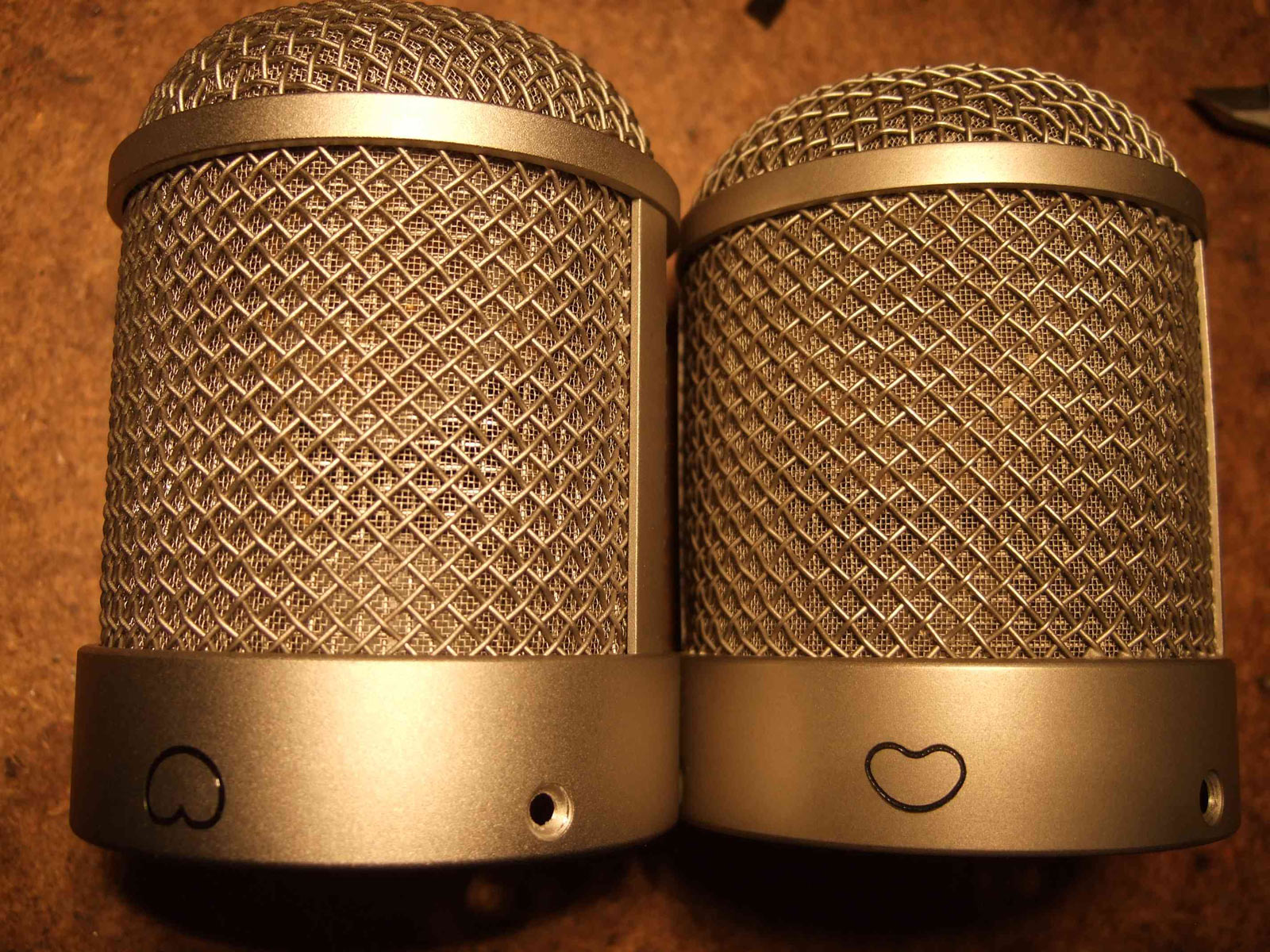 Inside weave on top (dome) screen is the finer mesh variety, as used in the fet47 after 1980, but, unlike the M149, the basket still has three layers of wire mesh with, looking from outside, coarse, fine, medium.

Note the different head assembly mounting surface: rather than honing out the brass plate except for the ears containing the three threads (through 1980) the whole ring is now of uniform thickness, as it was after 1980.I tried the new basket on the old head assembly, and vice versa: no problem, perfect fit. 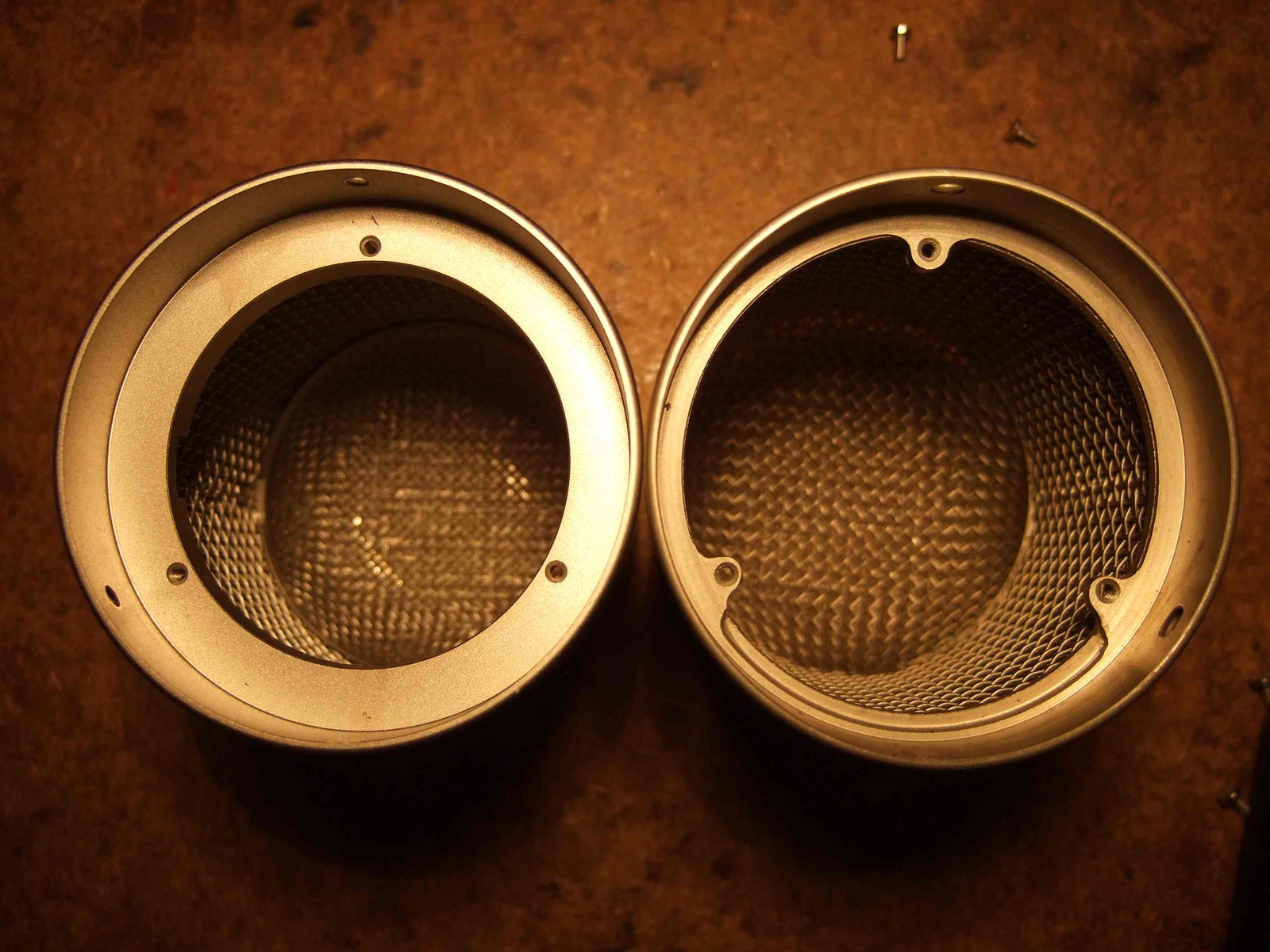 Note the '14.' inscribed on the diaphragm ring: it indicates a 2014 capsule manufacturing date.The capsule suspension rubber is as flexible inside the capsule column as it was before, for good damping, and nice whip-lash injuries when you drop the mic.

Hence the protective nylon capsule collar which was not part of the original, at least not on the capsules of the first two generations. The collar buffers and isolates the diaphragm ring against diaphragm distortion after an impact against the inside of the basket during whiplash: the nylon ring, not the diaphragm ring, makes first contact and redirects the impact force to the backplate, via the two collar mounting screws. 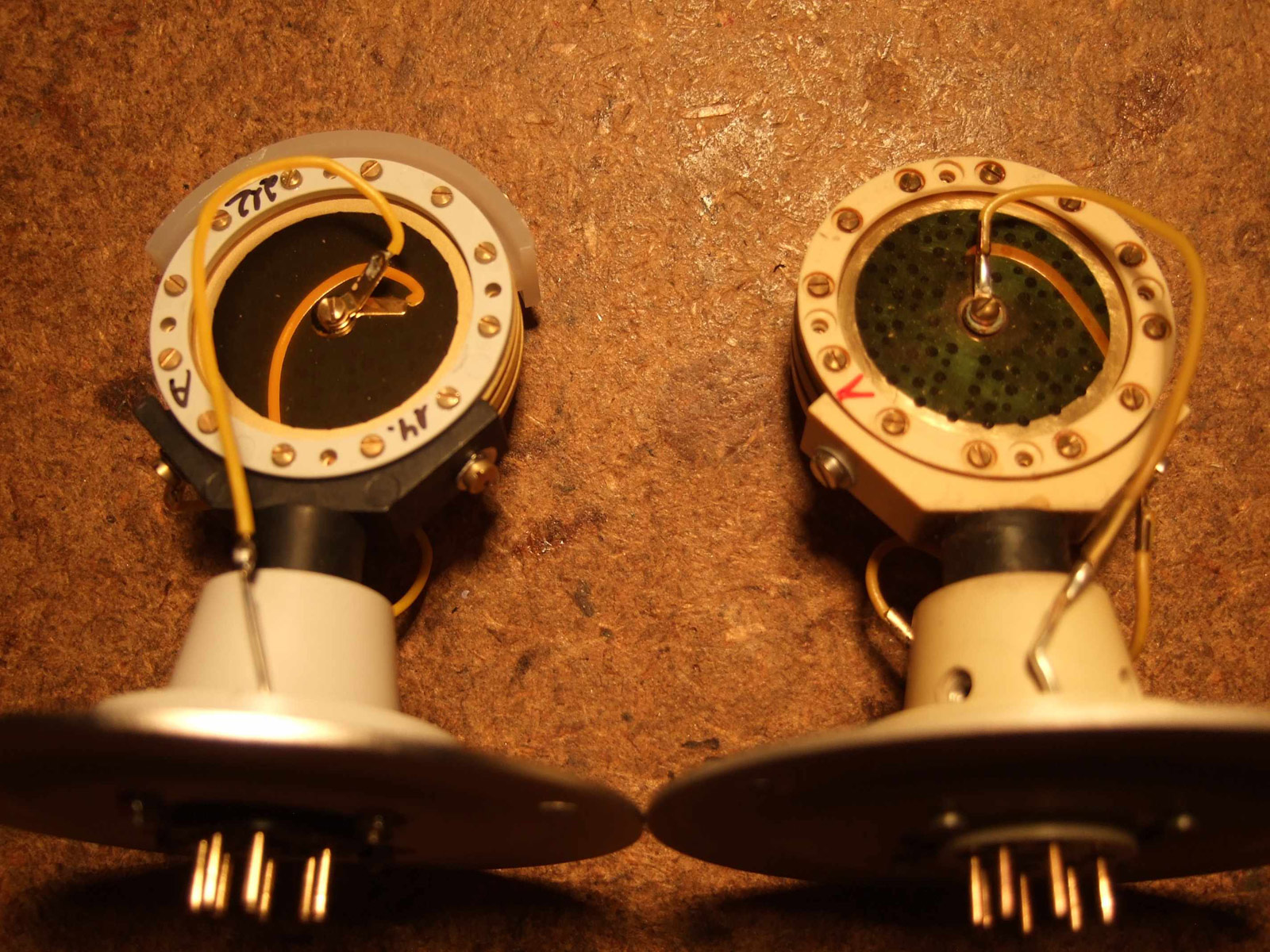 Aside of using a Neutrik, rather than Switchcraft 3-pin XLR, all seems the same as before.

Note the serial number of one of the first units shipped: 10106. Most likely the pre-series went to about 10100 or so, the mic then started shipping with ser. no. 10100 to customers. 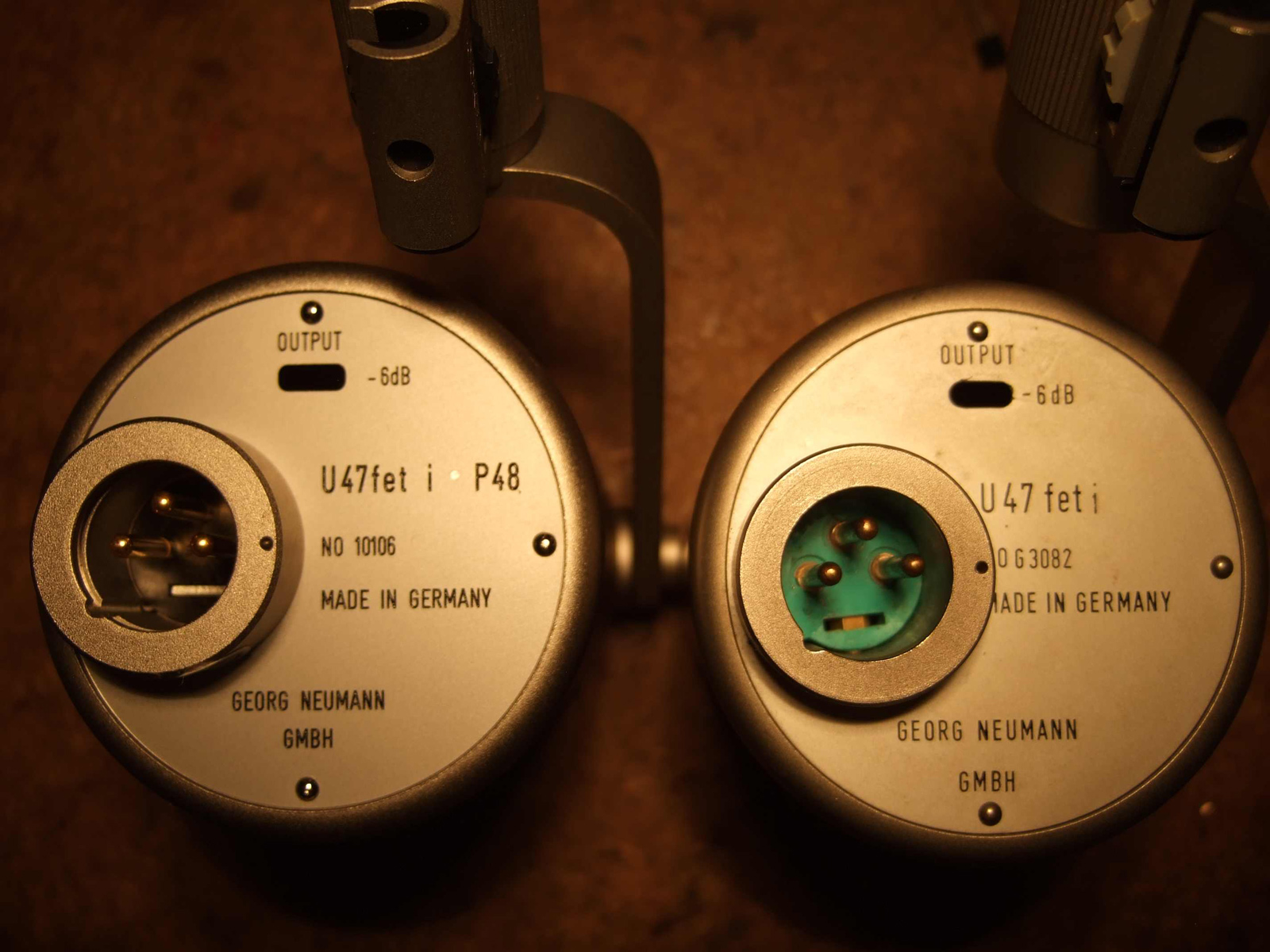 Note the close resemblence of the new part to the old. The reissue is starting with ca. number 10000. The head plate serial number always used to hover close to the same serial number as the mic.The U47fet reissue most likely started at 10100. 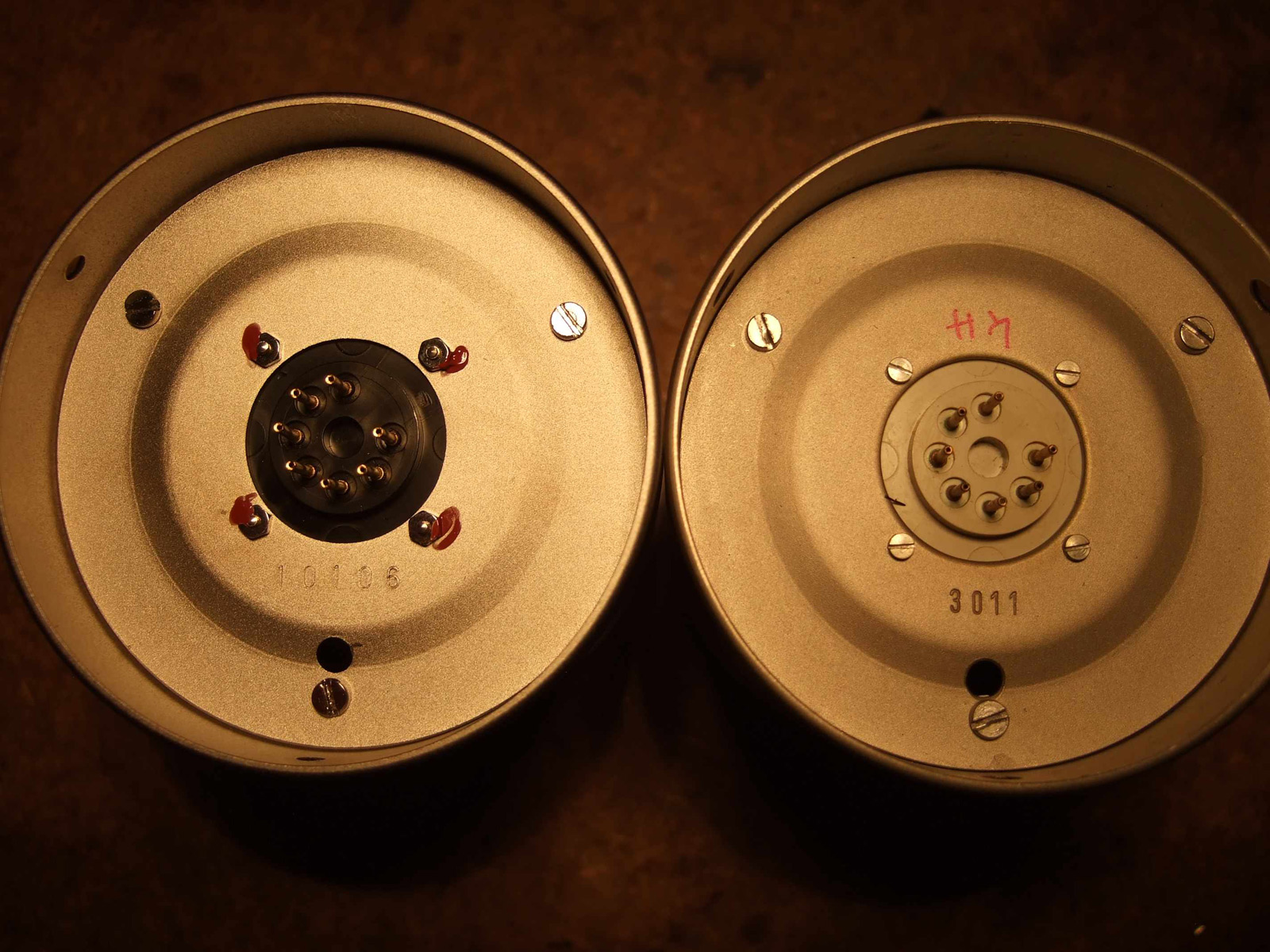 Point-to-point, as always; no microchips or multipoint wire connectors to be found anywhere 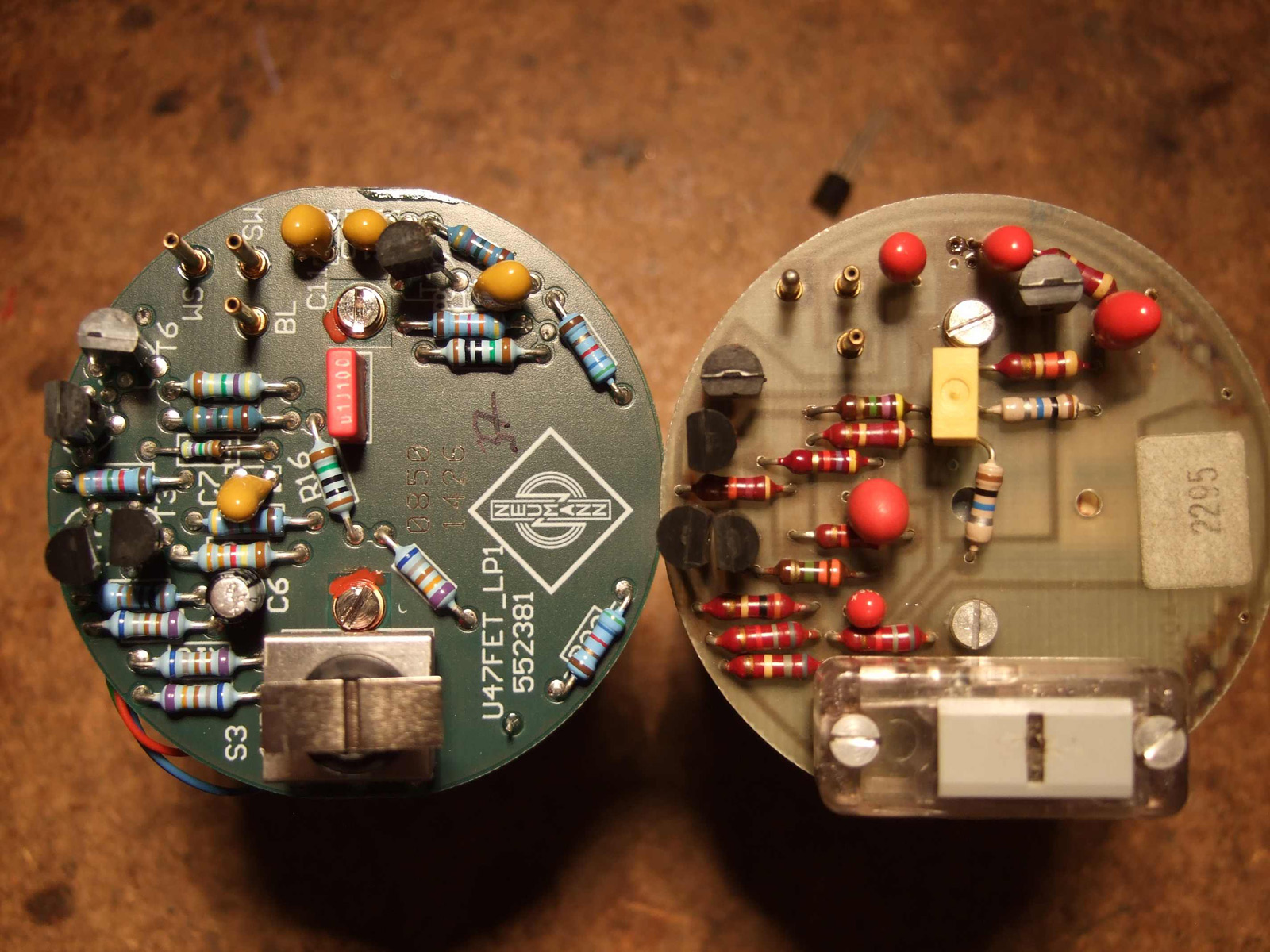 According to Neumann's Schneider, the model they chose to duplicate 1:1 for physical circuit layout was from ca. 1972 (circuit #02). The electrical circuit and physical features of the mic resemble that of the #06 variety (last version with three switches); two remaining versions, #07, #08 did away with the -6dB switch, and had the transformer output strapping permanently set for 200Ω, i.e. secondaries connected in series).

Notice the same point-to point mess that has annoyed repair people over the years. The version after 1974 at least had a board which you could slide forward for better access to most of the amp components (see vertical edge of the gray sub-board, with T2 (BC212) showing horizontally). Until 1974, as in the reissue, every time you want to work on the mic amp, you have to do micro-surgery in place, due to the lack of a circuit board that can slide out.

Note hexagonal column-construction of the amp compartment of the reissue, same as the original through 1974; whereas plastic injection molding was used after 1974 to form the amp cavity (the original in all pictures is a 1975 model). The plastic mold allowed for a slot to insert a newly developed rectangular circuit board, which made component layout and servicing a bit easier.

It's kind of amazing that Neumann would succumb to such unorderly component layout, but kind of cool that they have no shame doing it, for the sake of keeping it all original and immune from criticism by "100% authentic"-freaks, preconceptions of German anal-retentiveness be damned. 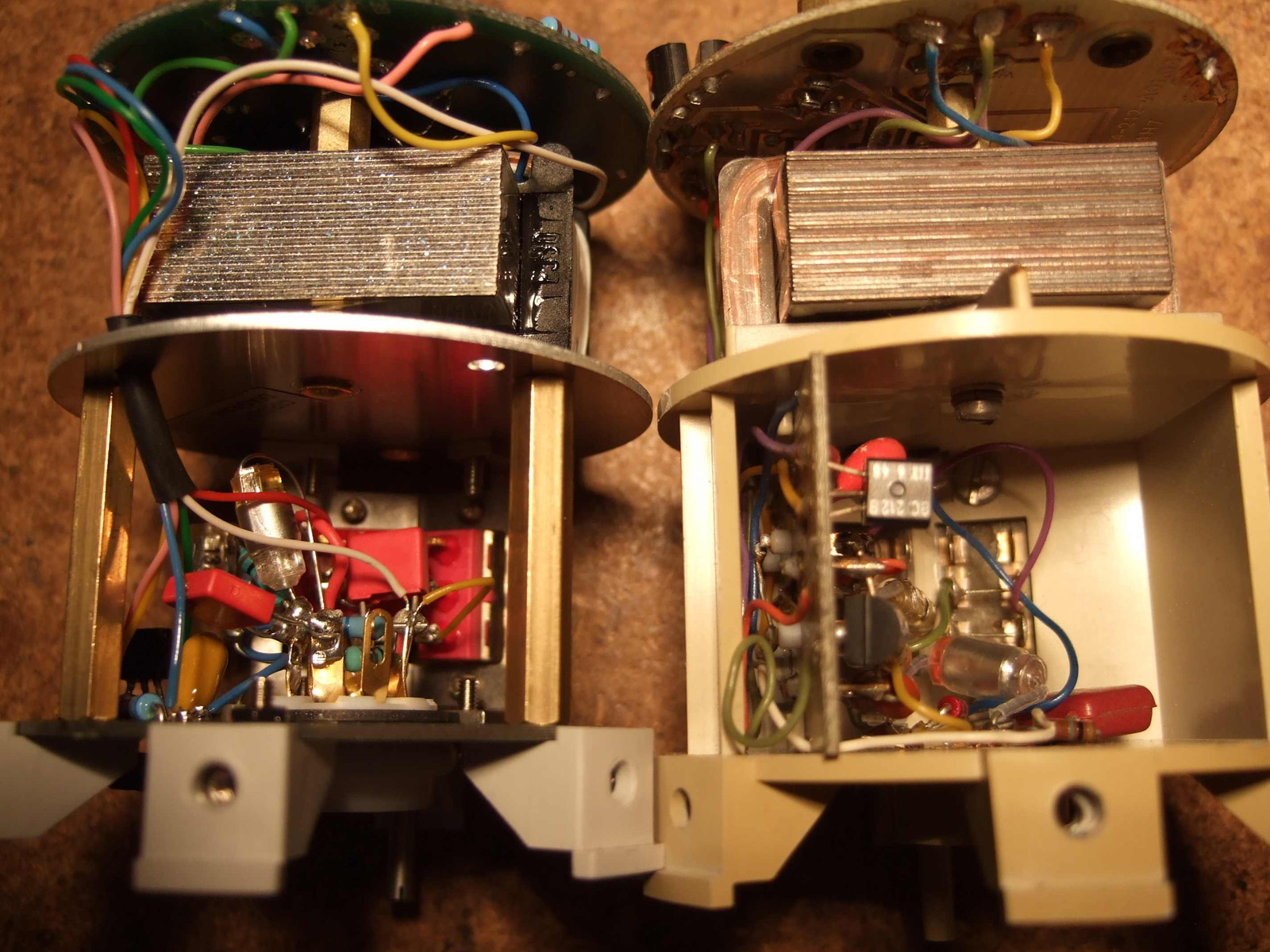 This could just be the appearance of the cutting edges of each laminate, or it could be a different alloy. Winding resistance seems similar to the old one, ± 10%. In any case, it does not seem to matter- the tone of the new mic retains the characteristics of the original. 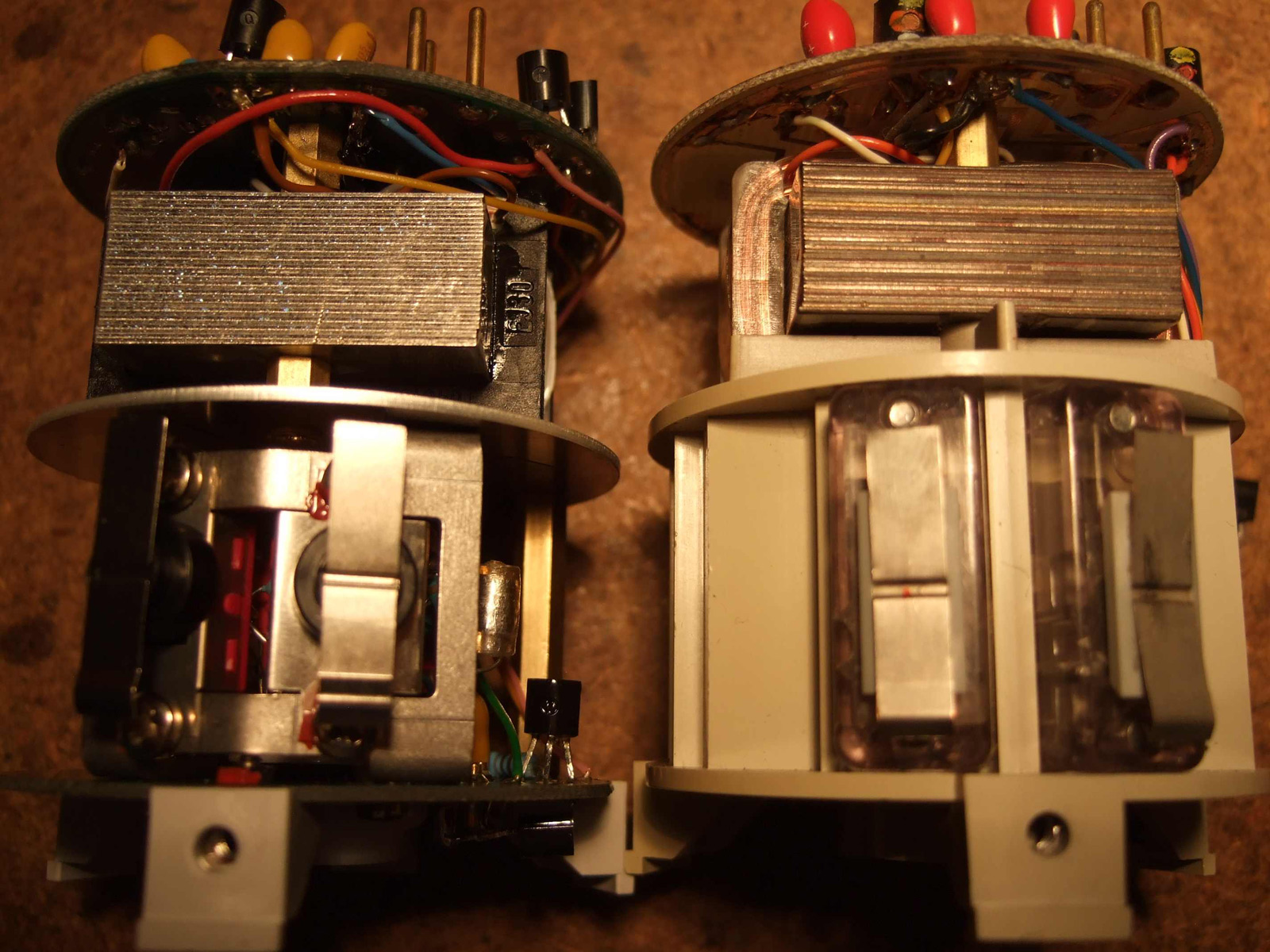 Late versions of the original (after circuit 930-05) had the FET mounted as it is on the reissue: on the outside of the top board (mine is a 930-05). Note the new FET used: a Fairchild 2N3819, same model, different manufacturer, as was used until the early 1980s. Sample FET placed on top of board, for illustration what it looks like. 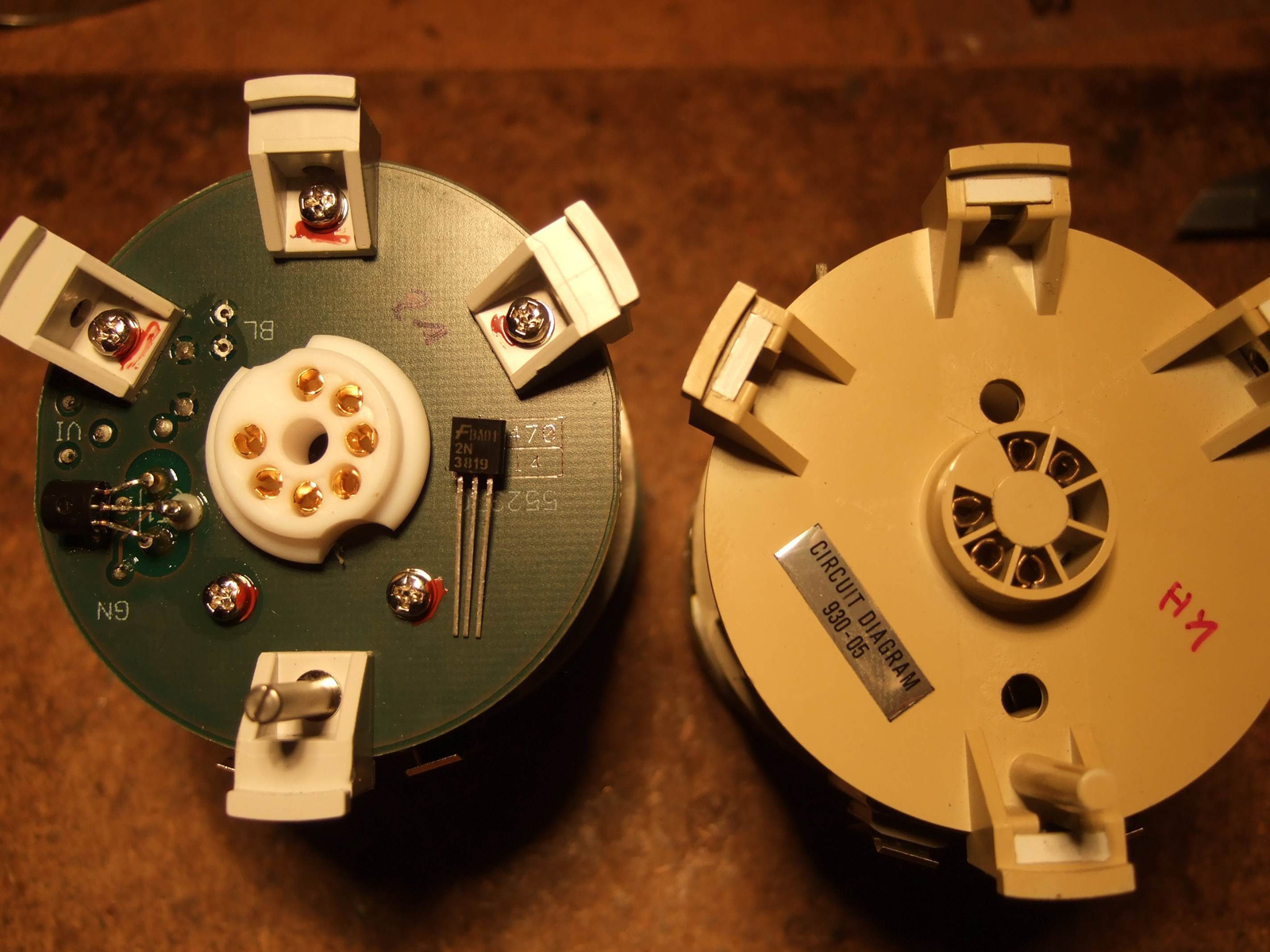 The question has come up repeatedly: can the old attenuator and impedance switches, which tended to self-destruct because of their brittle plastic housings, be replaced by the switches from the reissue?

The answer: not easily, if at all. The mounting hole distance to screw them into the side and bottom wall was 22mm old, and is 17mm on the reissue. With other words, the original fet47 mic housing and frame would need to be modified to fit the new switches. 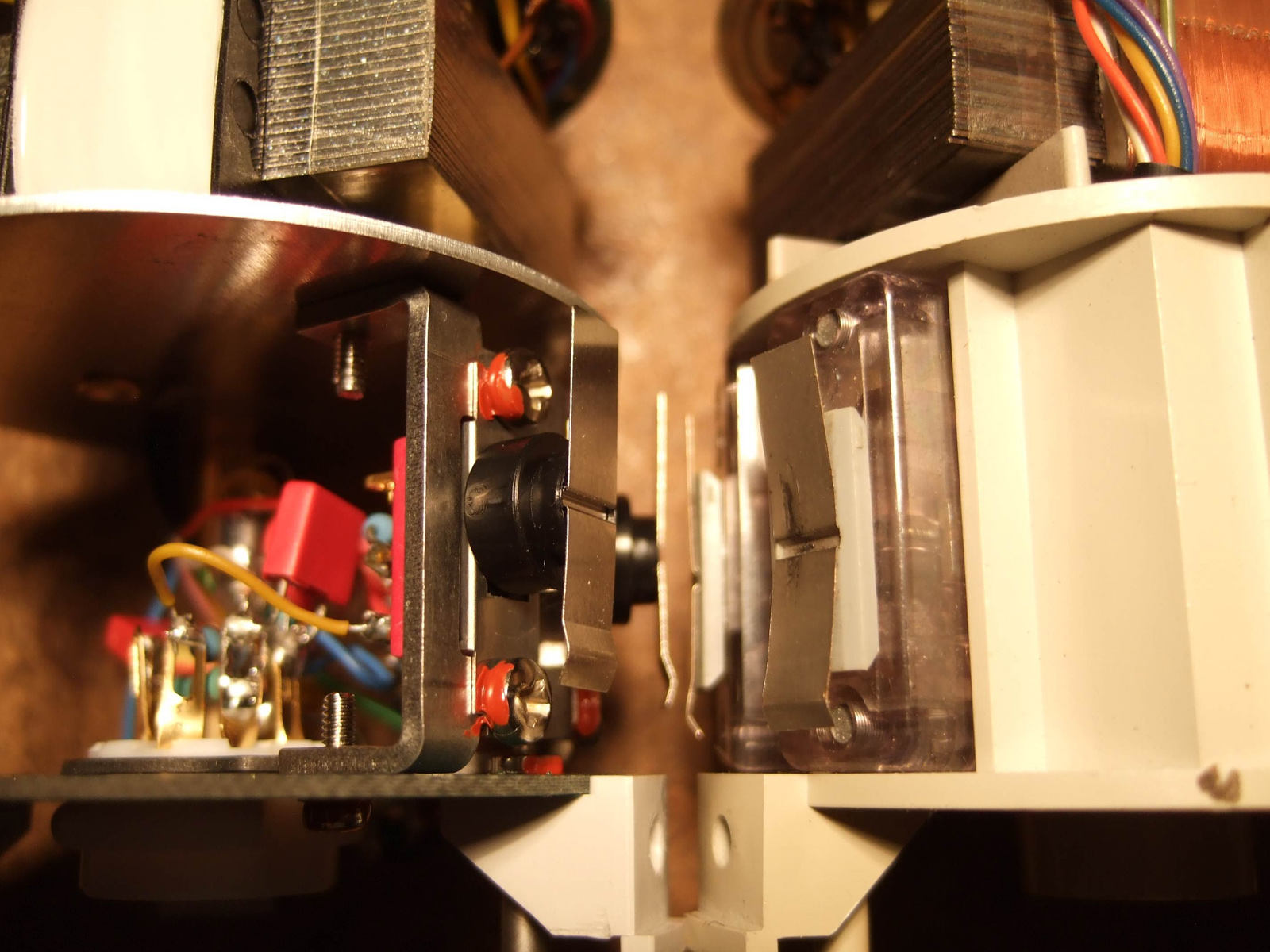 Materials on this webpage may be freely copied and distributed as long as copyright notice (© Klaus Heyne) and webpage address is included.